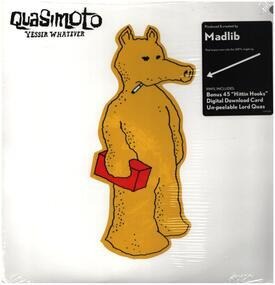 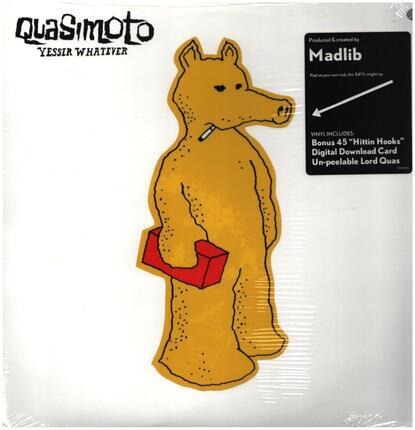 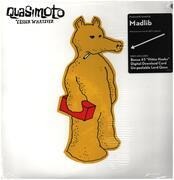 Initial copies were released with a white sticker affixed to the front cover of the jacket (as shown above in the image); however, a black sticker was substituted in its place on subsequent copies due to problems with the peel-off sticker.

Another version of this compilation was also released with a blue version of the Quasimoto figure on the front cover at the request of retailer Urban Outfitters, where it was sold exclusively (a small number of copies were briefly sold directly through the Stones Throw website).

Recorded in Lost Gates, CA, some time between the late 1990s and the present and the future.

The bonus 7' record was previously released as a 7' in 1999 by the Stones Throw label (side D's 'Microphone Mathematics (Remix)' was also later included as a track on the 2002 compilation, 'Peanut Butter Wolf's Jukebox 45's').

'Nobody Beats the biz', which is printed on the side C label found on the first side of the bonus 7' disc, was Quasimoto's response to Biz Markie's “Pickin' Boogers”, which was purportedly due to the fact that Quas prefers hooks to boogs.

'Keep it wrong' is printed on the side D label found on the second side of the bonus 7' disc.[elkep]